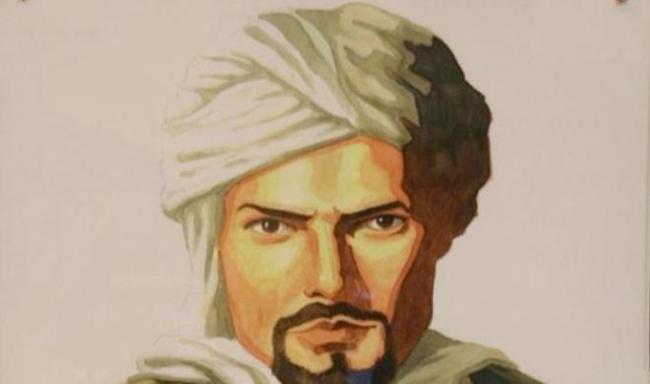 During the middle ages, India was called ‘the Golden Sparrow of the World’ and was seen as the ultimate prize. In Mark Twain’s words: ”This is indeed India; the land of dreams and romance, of fabulous wealth and fabulous poverty, of splendor and rags, of palaces and hovels”. Its interesting to note that the great traveller Ibn Battuta was of the same view some centuries earlier.

Who was Ibn Batuta?

Ibn Battuta was a jurist by profession in 14th century AD from Tangier, Morocco. Aged 20, he set out with the intention of performing the pilgrimage to Mecca in 1325 AD. This first journey arose such strong curiosity in him that he kept on travelling for the next 27 years, covering 75,000 miles (compared with 15000 miles of Marco Polo). His memoirs,The Travels, filled with local anecdotes, are a great read as they provide a very accurate description of a local’s life in these areas at that time. The information in this article has been taken from a translated and annotated version. 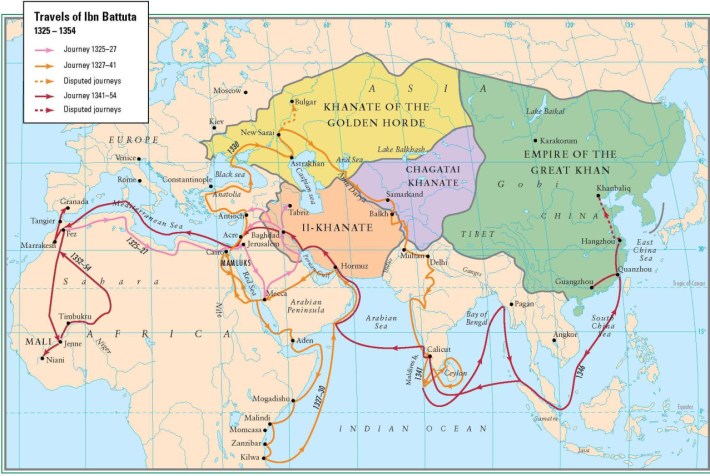 He is known as a great world traveller

Ibn Battuta reached the river Sindh on the outskirts of India in Sept, 1333 AD, eight years after he had set out from Morocco. During this period he had performed the Hajj (Holy Pilgrimage) in Mecca three times, visited the Ottoman lands of Antalya in modern day Turkey and reached the gates of Constantinople (capital of the Byzantine empire). His party was left stranded by their guide in the snowy mountains on their way to the Black sea and nearly perished in a storm while crossing it. Then he followed the silk road incentral Asia, crossed deserts and visited the Mongol ravaged cities of Bukhara, Samarkand and Balkh till he reached Kabul in modern day Afghanistan. He termed the Afghan people highway robbers and had to fight his way out of there through the mountain passes in the Hindukush (a mountain range on the Pakistan-Afghanistan border now) finally reaching the land of Punjab: the land of five rivers in the Indian empire. At that time India was being ruled by Sultan Muhammad from the Tughlaq dynasty, one of the various Muslim dynasties that ruled the Indian subcontinent for about a thousand years before the British in the 19th century.

The travel from Multan to Delhi

The Sindh river (also known as Indus), which flows through the length of Pakistan today was the life source of the Indus valley civilization, a contemporary of ancient Egypt and Mesopotamia. It marked the border of the Indian empire on the north west in Battuta’s time. Here he went under some form of immigration control as his details were sent to the capital Delhi, while he waited in Multan.

Indian civilization was certainly quite advanced for its time. Battuta was overawed by the efficiency of the postal service. In his words “The couriers are on foot. At every third of a mile there is a pavilion, where men sit girded up ready to move off. The courier takes the letter in one hand and a rod with bells in the other, and runs with all his might. On hearing the sound of the bells, a man in the next pavilion prepare to meet him, takes the letter in his hand and shaking his rod runs to the next station. And so the letter is passed on till it reaches its destination.” In this way a letter reached Delhi in five days, which normally required 50 days of marching, an extraordinary feat. He met the famous saint Rukn-ud-din, more popularly known as Shah Rukn-e-Alam (Pillar of the World) in Multan.

On his arrival in Delhi, the capital, he observed it as a city which combines both beauty and strength, greatest not only in India but in all east. About the wall which encloses the city he says it has no parallel; with twenty-eight gates, numerous towers and so wide that storehouses for grain are built in it.

About Sati, Yogis and Saris

On his way from Multan to Delhi, Battuta witnessed the Hindu tradition of Sati in which a widowed wife burned herself along with her husband’s body. He noted the fact that the Muslim chieftains have allowed religious and cultural freedom to the people. He was amazed to see the yogis of India who excelled in the secret arts of yoga (which has turned into a simple physical exercise now). He says “One of them remains for months without food and drink… they give information about hidden things… can tell what is happening at a distance…” In one instant he saw a yogi levitating in the air and nearly fainted with fright. Of the traditional Indian dress of Sari he says: “The women… wear nothing but loose unsewn garments, one end of which they gird round their waist and drape the rest over their head and shoulders. They are beautiful and virtuous and wear a gold ring in her nose.”

Delhi proved a very generous host, allowing Ibn Battuta to remain there for nine years acting as a jurist and advisor to Sultan Muhammad Tughlaq, the emperor of India. He amassed a lot of wealth during his stay. At one instant he says “He, the Sultan, assigned us pensions, giving me twelve thousand dinars a year, and added two villages to the three he had already commanded for me.” He describes the Sultan as very generous but had a hard policy for criminals as he “loves most to make presents and also to shed blood. His door is never free from a poor person who is to be enriched and from a living person (criminals) who is to be executed.” The Sultan had a habit to sought out learned men, teachers and artists and send lavish gifts. Ibn Battuta have added more than 15 accounts of the Sultan gifting out precious stones, money, villages and in one case a whole city. Likewise he recounts more than ten instances of people getting executed on the Sultan’s orders including an incident which ended in 350 soldiers (who deserted the Army at the time of war) getting executed in one hour. His sense of justice was so strict that once when a judge found the Sultan guilty of beating a boy unjustly, the boy was allowed to beat the Sultan in open court with a cane. Battuta says: “The boy took hold of the stick and struck the emperor twenty-one strokes so that his cap fell off.”

Leaving India with gifts but arriving without them

As gracious a host India was, the traveler in Ibn Battuta itched to leave Delhi. A chance came when the Sultan wanted him to accompany a caravan of gifts to the king of China in 1342 AD. He was soon again amidst the hardships of travel; near a city called Koel he fought some local Hindu rebels and in the village of Jalali he was captured and nearly killed before he escaped. Of the riches he had collected in India he says that “It is only rarely that anyone gets out of India with what he has earned here.” Sure enough, at the port of Calicut (modern Calcutta) his ships were caught in a storm, his goods and the Sultan’s presents to China were lost and he was left on the cost with nothing but ten dinars and one slave boy who deserted him soon after. Penniless, he travelled by foot to reach a nearby city and with the help of a Sultan of a small town escaped to the islands of Maldives. Promise of wealth and fortune had brought him to India but he was primarily a traveler and it was so he continued.

This article is written by Amad Junaid.